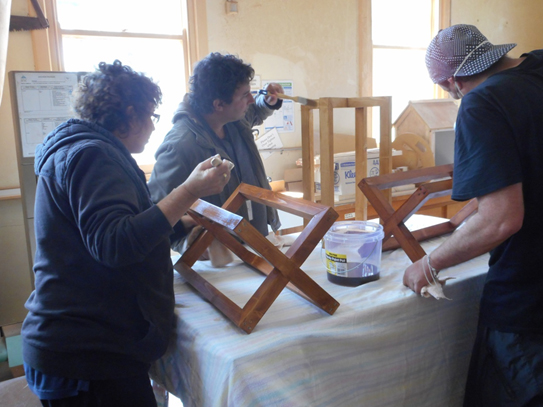 During 2015, many Unity boarding house tenants were involved in a community woodworking shed at the Glandore Community Centre, which gave tenants the opportunity to use a variety of machinery as well as work on group or solo projects.

Some of the projects that the tenants worked on included making cutting boards, coffee tables, coasters, and a bookshelf just to name a few. They also learnt a variety of new skills such as French polishing and finishing.

Woodworking is definitely a patience game and at times progress was slow going with lots of sanding needing to be done, however there was a real sense of achievement amongst the group once projects were finished. It was also especially great to see those involved using their creative side with some showing a real flair in working with wood.

One tenant in particular who eventually became a regular at the woodworking project had previously shown an interest in being involved with community connect activities, however this was the first time she had actually participated. It had been taking that first step that was difficult, and this all changed when she finally decided to come along to the woodworking shed.

Since her first session, she attended regularly and was always an extremely positive and enthusiastic member of the group. During her time at the shed, she worked on numerous projects from simple to quite complex items. Although she hadn’t previously done much woodworking she really excelled and showed great flair. She also provided encouragement to other group members with their projects as well as being very helpful in discussions about future planning. She said that she has “really enjoyed getting out of her room and socialising as well as working with her hands”.

The woodworking shed ran again in 2016 for a three-month period from February 1 where the group worked on a variety of projects, and learnt about furniture restoration